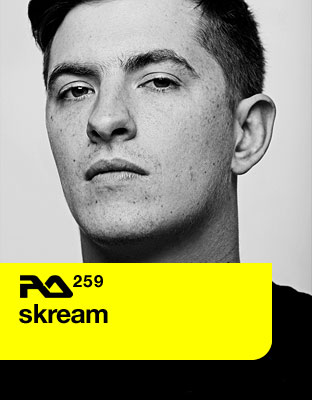 Croydon. Big Apple Records. Hatcha. Skream’s back story evokes all the right passages of dubstep folklore. Oli Jones began making music as a 15-year-old; he was an employee of the now legendary record store and one of dubstep’s first and foremost producers before his teenage years were through. Much of the music in the developmental stages of his career was recorded alongside Benga, with whom Jones now lines up—in addition to Artwork—as Magnetic Man. The group became the genre’s biggest crossover success to date at the end of last year with the release of their self-titled album, although Jones as always remained entirely difficult to pin down—NonPlus+, Swamp 81, Deep Medi Musik and Tempa are just a few of the imprints to host his zig-zagging 12-inches in the past few of years.

If you’ve caught Skream spinning at any point in his breakneck career you’ll know that the man is all about energy—and his mix for us is no different. Gigantic basslines knock heads with UK-centric rhymes and rhythms, and plenty of new and exclusive music.