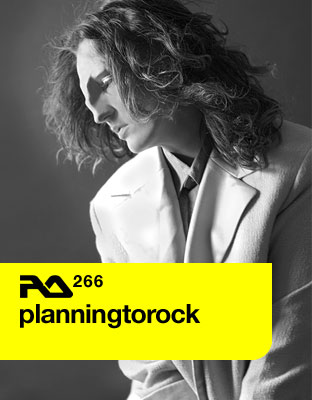 Planningtorock is the nom de plume of classically trained violinist turned experimental electronic singer/songwriter Janine Rostron. Born in Bolton, northern England, Rostron departed to Berlin a decade ago, which is where she put out her first, self-released record in 2004 and remains to this day. 2006’s Have It All LP fully introduced her brand of warped electronic pop through Chicks On Speed Records, while its follow-up, W, dropped earlier this summer on DFA, with Rostron exploring affected sax, strings and voice to „thrilling“ ends.

Known for her colourful on-stage theatrics and baffling ‚hats‘, Rostron last year got together with fellow head-turners The Knife and Mt. Sims in order to co-write the Darwin-inspired electronic opera Tomorrow, In a Year for Danish performance group Hotel Pro Forma.

It should therefore come as no surprise that Rostron’s approach to DJing is anything but straight-laced. Music from Oni Ayhun, The Fall and Anne Clark alongside plenty of her own unreleased material makes for strangely hypnotic trip through the mind of Planningtorock.