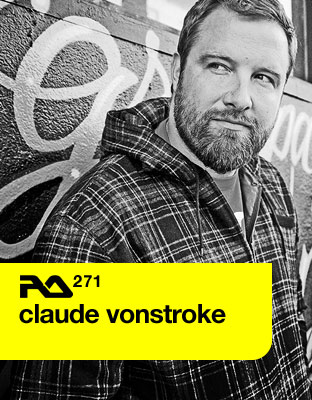 Claude VonStroke has released tracks featuring monkeys, whistling and gurgling. Claude VonStroke has also retained credibility. These two things don’t exactly add up. But that should tell you something about the man in question. The San Francisco-based producer has been releasing bass-heavy house with a sense of fun since 2005. The ongoing twist, however, is that just when you think you have him figured out, he’ll go deep on a track like „Aundy“ or remix a bass music anthem to devastating effect.

VonStroke’s Dirtybird label has been the vehicle for almost all of his original material but that’s not to say it’s been a one man show: a family of artists has formed around the imprint, with names like Justin and Christian Martin, Catz ’n Dogz, J. Phlip and Julio Bashmore all achieving international recognition from the Dirtybird stable. Looking at RA.271’s tracklist you could be forgiven for thinking that this was mostly an „influences mix“ but as is explained below, Claude VonStroke has recently taken to playing whatever the heck he feels like. And he has his grandma to thank for that.