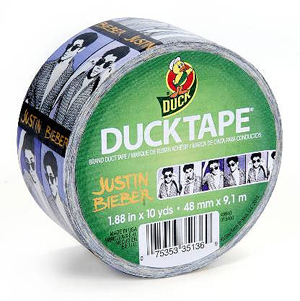 What could possibly be next for teen sensation Justin Bieber? He’s conquered the music world with a number one album, concert tours that sell out in minutes and even a world record for the most watched music video on YouTube. His film “Never Say Never” hit it big at the box office, and he has millions of devoted Facebook® fans and Twitter® followers. So, what’s left to make the Canadian cutie’s portfolio complete? His very own Duck Tape, of course!