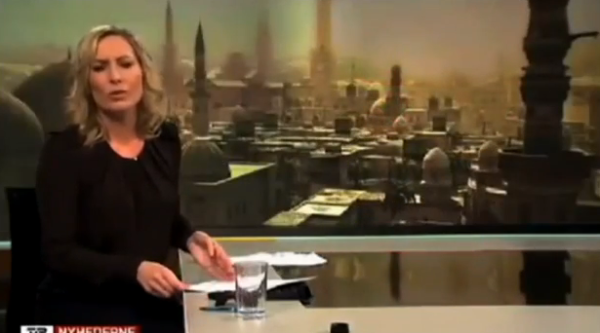 News anchor Cecilie Beck presented a segment about the conflict in the Middle Eastern country while sitting in front of a picture taken from adventure game Assassin’s Creed.

Jacob Nybroe, head of news at TV2, has been forced to apologise after the blunder on February 26 was highlighted on social networking sites.

Danish media reported that a graphic designer had pulled the image of a picturesque Damascus skyline from YouTube to use in the report.

The feature was about the preservation of Syria’s heritage and Danish news website Politiken reported that the employee believed it was a genuine picture.

It is thought the image is from the first game in the Assassin’s Creed series when the action is set in historic Damascus, as well as other parts of the Middle East.

Mr Nybroe said he learned of the mistake this week following the online speculation.
He said the incident is a ‚reminder to us all of the importance of verifying the sources of pictures.‘

Mr Nybroe told Politiken that there had been a ‚clear-cut error‘ and that it would have been even more serious had the employee taken the image directly from the computer game.

He added that the station has since implemented a new system so that correct images can be more easily found.