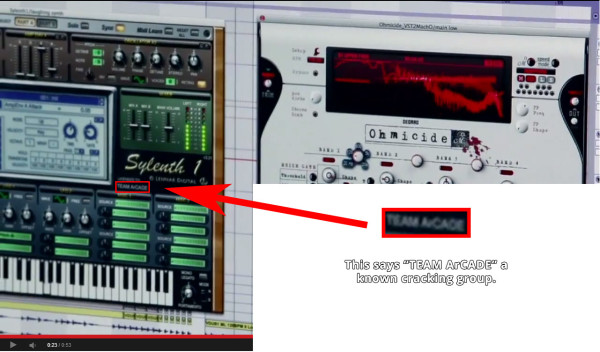 Recently EDM heavyweight Steve Aoki was busted by people with an eye for detail. They were watching a teaser video for Aoki and Linkin Park’s upcoming collaboration called “A Light That Never Comes.” At some point early in the video, the camera gives us a shot of Aoki’s computer screen with a couple of DJ programs open on the desktop. The dead giveaway is the program Aoki is using (Sylenth 1) is registered to TEAM ArCADE, a well-known software hacking group.

Immediately people took to the internet half-jokingly proposing that perhaps Aoki’s piracy somehow made it ok for people to steal some of his beats off the internet. Especially because Aoki cold totally afford to buy the software legally – he is on the Forbes list of the richest DJs.

Aoki responded, however, and explained this crazy situation. According to Aoki, he has to buy 5 or 6 new computers a year while he is on the road. He says that after getting his latest computer (the one that is in the video) he asked his road team to load it with the production software he uses. Aoki states that someone on his team didn’t ask for the authorization code and instead took the shortcut of just installing a pirated version.

In a real upstanding fashion, however, Aoki thanked the people who pointed out the error, and has since taken screenshots of his properly licensed software, and even showed the PayPal receipt indicating that he has rightfully paid full price for the software. Well done, Aoki!