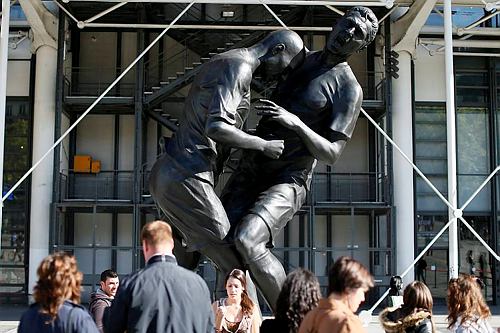 A statue of the French legend Zinedine Zidane headbutting Italy’s Marco Materazzi in one of football’s seminal moments is being erected on Doha’s Corniche. According to the Doha News, Qatar Museums Authority (QMA) has brought the sculpture called “Cope de Tete” for an undisclosed sum. Designed by Algerian artist Adel Abdessemed, it depicts the famous incident in the 2006 World Cup final and was originally installed in Paris. Zidane, who is of Algerian descent, was sent off with 10 minutes of extra time left at Berlin’s Olympic Stadium when he ploughed his head into Materazzi’s chest. The Italian later admitted he had insulted Zidane’s sister to provoke him. Italy won the trophy. The statue was first shown outside the Pompidou Centre in Paris, where it received a mixed reception. Angry French football officials wrote an open letter to Zidane, asking him to get the statue taken down.