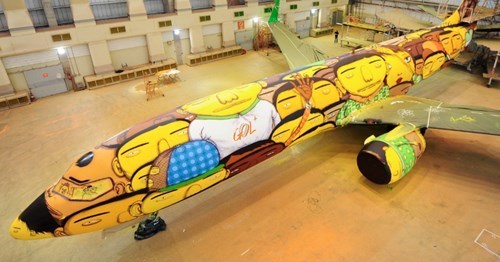 Brazilian graffiti artists Os Gemeos recently partnered up with GOL Airlines to paint this gargantuan mural on the fusalage of a Boeing 737 that will be used to carry Brazil’s team during the World Cup. The duo used some 1,200 cans of spray paint to depict a crowd of fans in their signature vibrant yellow which coincidentally is the same color used by the Brazilian team. Completed in only a week, the plane first flew today and will remain in use for at least another two years after use by the team. See many more photos over on Arrested Motion.