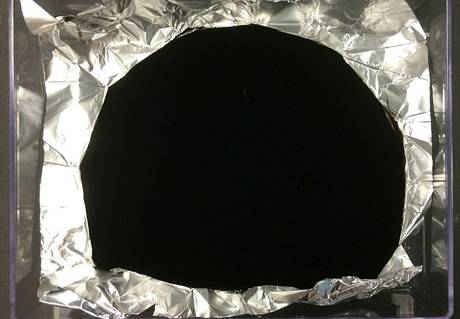 A British company has produced a “strange, alien” material so black that it absorbs all but 0.035 per cent of visual light, setting a new world record. To stare at the “super black” coating made of carbon nanotubes – each 10,000 times thinner than a human hair – is an odd experience. It is so dark that the human eye cannot understand what it is seeing. Shapes and contours are lost, leaving nothing but an apparent abyss. […]

The nanotube material, named Vantablack, has been grown on sheets of aluminium foil by the Newhaven-based company. While the sheets may be crumpled into miniature hills and valleys, this landscape disappears on areas covered by it. “You expect to see the hills and all you can see … it’s like black, like a hole, like there’s nothing there. It just looks so strange,” said Ben Jensen, the firm’s chief technical officer.

Blackest is the new black: Scientists have developed a material so dark that you can’t see it…