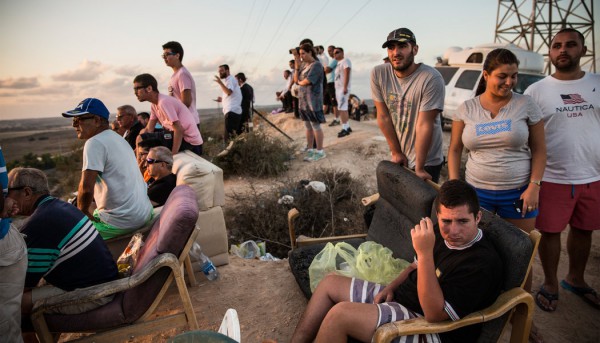 Last Wednesday night, as he stood on a hilltop outside the Israeli town of Sderot and watched the bombardment of Gaza on the plain below, a Danish newspaper reporter snapped an iPhone photo of about a dozen locals who cheered on their military from plastic chairs while eating popcorn. Allan Sørensen, a veteran Middle East correspondent for Denmark’s Kristeligt Dagblad, then uploaded the image to Twitter with a sardonic caption that described the macabre scene as “Sderot cinema.” […]

Explaining that he has also previously witnessed Palestinians cheering news of bombings that killed Israelis, Mr. Sørensen said that, in a war, “this is what happens.” Civilians and fighters on both sides, he said, “go through a process of dehumanizing the enemy.”