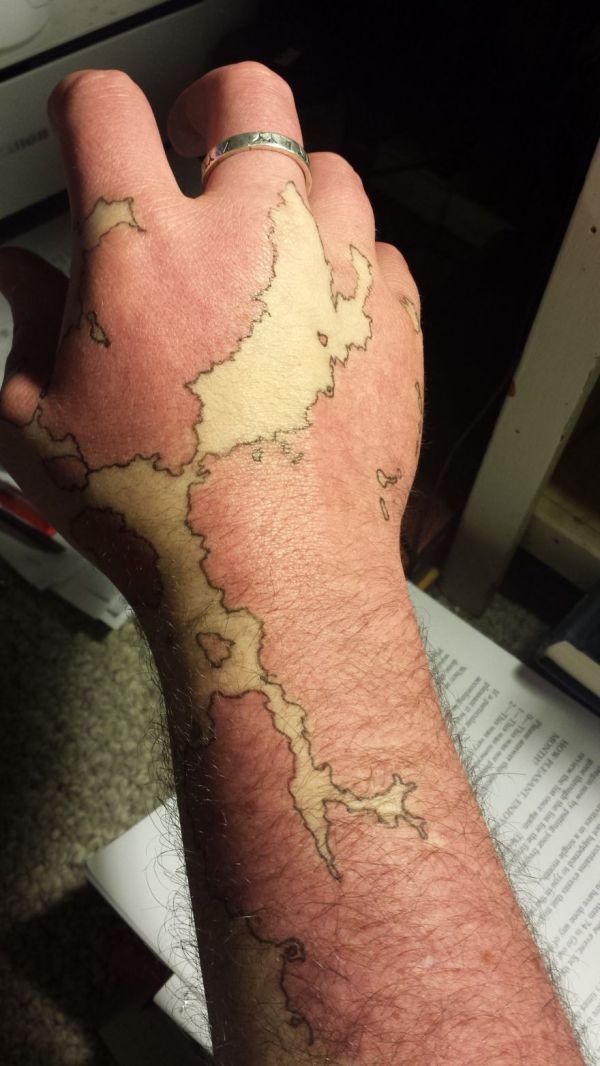 Your post has set off a fire in my head of a story of a boy and his infant sister brought to a small trade caravan years ago. The woman that traveled with them took ill and needed rest and to get back to full strength to raise them both. However she took a turn for the worst and died there. A leader of the caravan took pity on the children and after he saw the markings on the boys arm decided to take them in. He felt that he would be marked as an outcast and felt a kindred spirit to him. As the child grew the markings never faded. However, he was seemingly drawn to maps and could easily understand and commit them to memory. A skill that impressed the caravan leader. He raised him as his son and together they used his gift to turn a small caravan into a traveling merchant city and then into a thriving trade mecca in the desert. Through this entire time, the now King grew in power, took a wife, raised a family and always took care of Arnus. With his fortune he was able to gather maps from all over for him to read and study, something the boy loved dearly. The boy even became adept at recreating them and even more money was made as they sold his creations. As he grew into a young man it was plain that he would one day marry the Kings oldest Daughter and inherit the kingdom he helped build. Then his young sister took ill. A rash and high fever took hold of her. For nearly a week she sweated and hallucinated with insane visions. At last the fever broke and the rash receded, leaving behind a map like his. This is when Arnus decided that he could no longer hide what he had been doing all of these years. That he was in fact searching for a land mass that would match up to the map on his arm. Now he had a new purpose because if it had appeared on his sister as well, then there was definitely much more to it.

Now he sets out on journey after reports of a man with markings like his makes it back to the city. But what he founds at the edges of the known maps is more than he could imagine. He doesn’t just find more questions, but answers. Answers that shake him and things more deadly than simple dragons on the corner of a map.

Here there be Dragons : Part 1 of the Birthmap Trilogy.